The Wireless Innovation Forum announced the winners of their annual Achievement Awards at the Wireless Innovation Forum Conference on Communications Technologies and Software Defined Radio (WInnComm 2017). SVFuA, the software defined radio (SDR) system for joint and combined operations developed for the German Federal Armed Forces (Bundeswehr), was honored as Technology of the Year. 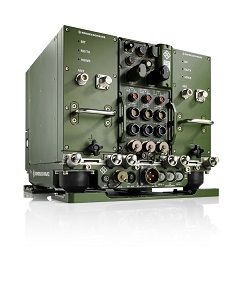 It supports the WInnForum objective of enabling coalition interoperability. As the lead industry partner in the SVFuA project, Rohde & Schwarz facilitates this approach with its waveform development environment.

The objective of the SVFuA project was to develop a software defined radio (SDR) system for the German Federal Armed Forces for joint and combined operations. It was successfully completed in June 2016. In June 2017, following many years of joint development, the Federal Office of Bundeswehr Equipment, Information Technology and In-Service Support (BAAINBw) signed a contract with Rohde & Schwarz for the procurement of the SVFuA. The SVFuA gives the German Armed Forces all the tools needed to create and especially protect information superiority. It also ensures interfaces with allies during joint missions and for collective defense.

Bosco Novak, Executive Vice President Secure Communications Division at Rohde & Schwarz, said, “We are honored to receive this recognition of our pioneering achievement from the Wireless Innovation Forum, an organization of experts dedicated to technology innovation in communications around the world. We are proud to support the German Armed Forces with the SVFuA system for secure and interoperable, state-of-the-art tactical communications.”

Both the radio platform and the waveforms are certified as compliant with the WINNF endorsed standard Software Communications Architecture (SCA) version 2.2.2. The certificates of SCA compliance were issued by the German Federal Armed Forces Technical Center for Information Technology and Electronics (WTD 81). The WTD 81 is the first European test lab to issue a certificate of SCA compliance, and SVFuA is the first European SDR to achieve SCA certification. SVFuA is also the first European SCA based SDR system to successfully port third-party waveforms. It is also the first radio system worldwide to port waveforms while protecting the intellectual property rights of both the platform and the waveform suppliers. As the lead industry partner in the SVFuA project, Rohde & Schwarz facilitates this approach with its waveform development environment. The German Federal Office for Information Security (BSI) stated that the system is certifiable up to the national classification level SECRET (GEHEIM). This is an essential precondition for certification up to the NATO classification level NATO SECRET. As a three-channel radio system, SVFuA supports multiple independent levels of security (MILS). Overall, SVFuA supports the WInnForum objective of enabling coalition interoperability.